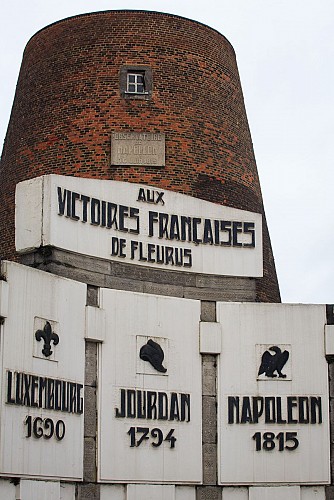 Naveau Windmill and the Monument to the three victories

Rather than retire to the north to join Wellington, Blücher concentrated his troops around Ligny between Fleurus and Sombreffe. He hoped to crush Napoleon, believing that he was only up against the 50.000 French troops that were advancing toward him and counting on the support of Wellington on his right flank in the heart of the battle. However, he did not realise that Napoleon had kept reinforcements back from the battle and that Marshall Ney would attack Wellington at Quatre Bras.

When he arrived in Fleurus, Napoleon climbed to the top of the Naveau windmill to overlook the battlefield in Ligny. As with all other battles, Napoleon chose the highest point so that he could watch the fighting unfold from a distance. Surrounded by his staff officers, orders were transmitted to the field of operations by experienced messenger riders.