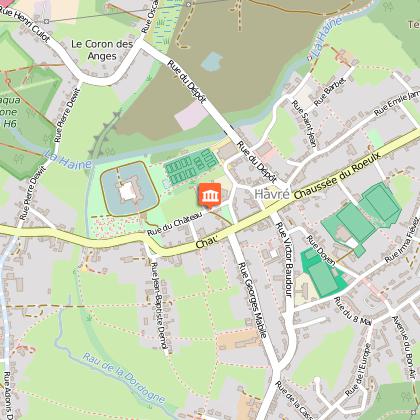 Dating to 1266, the site has withstood several sieges, which have
altered the area’s layout overtime. In 1518, the castle fell into the
hands of the House of Croÿ, and received a surgeon named Ambroise Paré
who saved the life of Charles Philip de Croÿ in 1569 by tying his
arteries, which was contrary to the prevailing practice.


At the end of the 16th century, the castle was in a sorry state. Charles
Alexander de Croÿ, Marquis of Havré, envisioned a new, majestic design
and capped the 14th century octagonal dungeon with a fine slate onion
dome in 1603. Thus converted into an opulent residence, the castle
hosted some prominent visitors: Van Dyck, Rubens, Mary de Medici,
Infanta Isabella, Mary of Hungary, and the Duke of Malborough, among
others.


After the French Revolution, the Croÿ family no longer inhabited the
castle. They had neglected it, and abandoned it once and for all in
1839. In 1919, Canon Puissant tried to save the building, but he could
not afford to pay for the task. By 1930, the building started to
collapse and the very existence of the domain was threatened.
Fortunately, on the initiative of Emile Poumon, a local historian, a
number of citizens formed an NPO in 1978 and started the long work of
safeguarding the place.

Guided tours of the castle for groups are available by appointment.