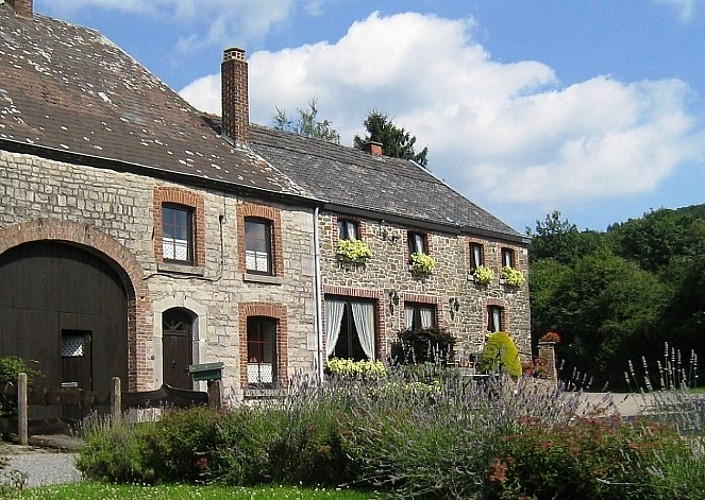 The 1st house on the right, number 02 is quite an eye-catcher. This long limestone and sandstone farm has a gable dated 1749. The village elders still call it 'Maison Colle’ or the ‘Maison des bourgmestres’. The front door lock is decorated with the Napoleonic eagle, and is, like the rest of the neighbourhood doors, fitted with a door knocker.

Rumour has it that during the Revolution, a priest was hidden in this house. The villagers also remember when the whole neighbourhood met at the bakery for the legendary ‘poiret’ (traditional, jam-like pear syrup) and vinegar making evenings. Nowadays, the house is for rent as a self-catering countryside cottage.

A long time ago, between the Maison Colle and the brook, there was a building that was called ‘la salinerie’, where saltpetre (that was then sold in Dinant) was produced. On 30 April, 1862, a fire started in this house, killing a small ten year old girl and destroying 9 other houses.

The mill, at number 1, dates from 1843 and used to be a sheep farm. Its 1969 buyer not only consolidated the banks of the brook, but also turned the farm into a mill.
Among the other - comprehensively restored - buildings, you can admire number 07, and old farm from 1845.