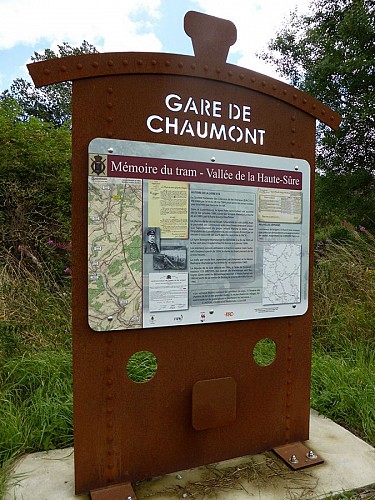 Route “Stories from the Tram”

Halfway between Remoiville and Hollange, you cross the former tram route, which linked Marche to Arlon and which was the longest tramline in Belgium (about 80 km). Laid out in 1894, the former steam tram took about 6 hours to cover the distance. In 1934 a railcar system was adopted, which cut the time to 3 hours. The tramway was the only public transport in the area, but was much more than just a transport system, it was a place of encounter and interaction that played an important role in local life. The last tram ran in the sixties.

This is an ideal place to stop and get out of your car. Walk or cycle along a section of the former regional tramway.

At some bridges and former stations, from Sainlez to Wisembach, there are instructive panels that tell you “Stories from the Tram”, which are based on cards, historic documents, old photographs and eye-witness accounts. Learn more and listen to the audio commentary on the website of the Parc Naturel Haute-Sûre Forêt d’Anlier at www.parcnaturel.be under the tab “Activités/Découverte”. (only in French)