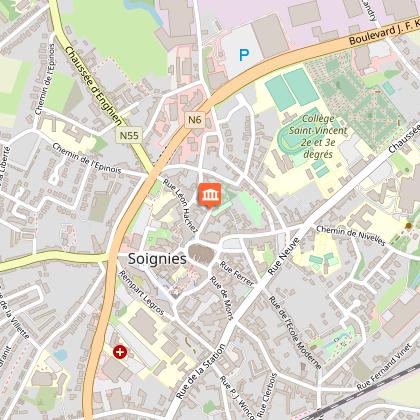 "Founded in 1895, the museum has ever since housed the generous gifts and donations of several generations of "Sonégiens"--inhabitants of Soignies canton--who are strongly attached to their municipal museum. Stone sculpture here is especially well represented by a 15th century Christ which quite often features in major international exhibitions, as well as by "the Man with Worms??", likewise a 15th century work, and one which illustrates in particular the macabre tastes and raw realism of that period. The museum also boasts a large archaeological section. This feature is explained by the wealth of this region, in this field. Since the end of the past century, various quarries have yielded a large number of mammoth tusks and tools made with flint, fashioned by the people of those remote times (between 50,000 and 100,000 years BCE)--and are still coming up with such treasures. The museum also houses the proceeds of the archaeological excavations carried out by the Royal History and Archaeology Club of the Canton of Soignies: Roman villa, mediaeval keep. We should also mention an important section illustrating the setting in which the people of Soignies lived out their lives a century or two ago. There are several important pieces of furniture, plus a large collection of arms and weaponry--firearms and bladed weapons alike--, sets of scales and weights used by money-changers and gold- and silversmiths, collections of porcelain and earthenware (faience), and confraternity rods... The museum is installed in an old chapel standing in the middle of wooded grounds which used to serve as a cemetery. In 1890, this cemetery, which was too small and too near where people lived, was abandoned, but thanks to the perseverance of Amé Demeuldre (founder of the Archaeological Club of the Canton of Soignies), it was not destroyed. The chapel was used as a museum and the funerary monuments were restored. Today it is a small park, a haven of peace and quiet, perfect for daydreaming, punctuated by almost 150 votive chapels and blue stone gravestones. The Romanesque part of the chapel, i.e. the part of the building which can be seen directly by visitors when they enter the park, has at times been dated in the 9th century. It was probably contemporaneous with the Norman Invasions. It would nevertheless seem that the present-day edifice is later than that period, if we go by its elevation, if not its layout. It is also evident that it been altered on several occasions. A side door has been added, and this is the currently used entrance. Changes were made to the north and south windows during the 17th century (marks of stone-dressers from Soignies canton attest to this). The woodwork and frame were entirely rebuilt at the end of the last century, when the building looked as if it would end up in ruins. This chapel is enhanced by a series of very old tombstones (along the walls, both outside and in, and in various places in the middle of the paved floor). Some of these stones date back to the 14th century. The old altar of this chapel was formed by a huge tombstone from the 14th century, made with blue stone. In the last century it yielded three magnificent old glasses, all intact (possibly unique in Belgium) as well as a relic and a lead plaque engraved in the 15th century. This objects are currently in safekeeping in the museum. In 1650 or thereabouts, a sort of choir, where the altar then stood, was added to the Romanesque chapel. This altar still exists today, and boasts the distinctive feature of having moveable panels which bear on one side painted Old Testament scenes and on the other funereal motifs, bones, and skulls. The chapel was actually earmarked for funerary purposes. The Royal History and Archaeology Club of the Canton of Soignies has a collection of archives which is currently in the throes of being inventoried. It is accessible during this period only by appointment."